Teenage dating is like riding a rollercoaster. You are in love one moment, then heartbroken the next. What you do not expect from dating in your teens is violence. One brave teen shares her story of domestic abuse which lasted three years.

Walking in the picturesque Arderne Gardens in Claremont you would usually see squirrels running about, and families who are feeding the ducks in between the lush greenery. It is a place which is quiet and really peaceful. What I encountered on Freedom Day was the exact opposite: a young couple who were physically fighting. 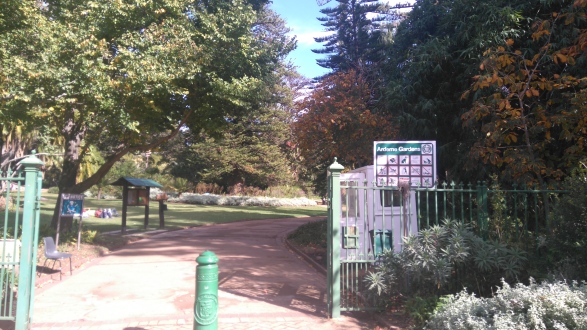 At 10:00a.m in the morning, the Arderne gardens is still fairly quiet, here and there I would see someone walking past me. Until, a couple came and took pictures, it was so close to me I decided to move away. A few minutes later, they began to argue. I remember rolling my eyes at them and thinking how trivial their arguments must be, they barely looked 18. What happened next really shocked me. He punched her right in the face – the way an angry man would punch another man. 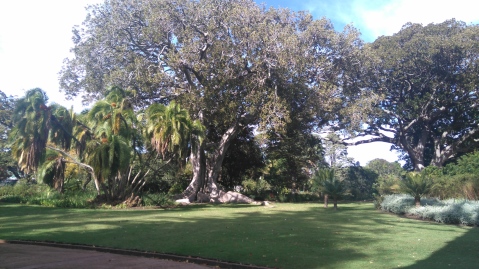 This is the area in which the couple had the fight          Image by: Dineil Jagers

For the next few seconds I sat there in shock, feeling confused as I did not know what to do and also angry, that a boy would hit a girl like that. The brazen part of me wanted to go over there and punch him, hurt him, but sensible part won and I decided to go call the security guard.

Once the security guard arrived I walked with him to the couple. What happen next dumbfounded me. She apologised to him, she apologised for making him angry. While the security guard spoke to her boyfriend, I decided to ask her a few questions and I found out that she was only 15 years old. It was then that I realised that domestic abuse does not only happen in marriages or in adult relationships, it happens to many teenagers as well. It is rarely spoken about because teenage relationships are often seen puppy love and not that serious. 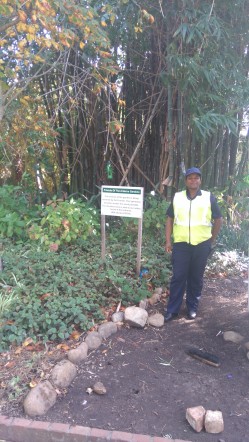 The security guards are always at the entrance       Image by: Dineil jagers

Domestic abuse and violence is serious, no matter what age you are. It is not limited to intimate relationships, family and friends can be domestically abusive as well. It is also referred to as teen dating violence. I decided to look into the matter and found Ashley*, who is a 16 year old high school student that has been in an abusive relationship. I decided that the interview would take place at the Arderne gardens. It was important that she felt comfortable and this place created just the right atmosphere.

I started off by asking her simple questions, about her life. Once I saw that she was at ease, I began asking the tough questions. Being reminded of something so traumatic, I thought that it would be difficult and she might not want to answer, that was not the case.

It is not uncommon for girls as young as 13 to be in relationships, it is reported that children as young as 12 enter into relationships or see the person that they like as their boyfriend or girlfriend. Ashley recalls that it was not her first relationship, “I have been in relationships before him, which usually didn’t last very long”. She admits entering into a relationship so young, she wasn’t fully aware of the signs of domestic abuse. At that age you are not as developed and equipped to handle abuse from a partner.

The relationship started off good, I would really never have expected him to be the guy to hit me like that

Domestic abuse is very difficult to talk about and confront. The reason for this is that it is your partner or someone really close to you whom you trust. You do not expect that kind of behaviour from them. Domestic abuse is not limited to physical abuse only, destruction of your property and stalking is seen as domestic abuse as well. For Ashley, the abuse was emotional and physical. “I would hide the marks on my body and with clothing and a scarf so that nobody could see it”, Ashley recalls. The victims of abuse often feel as though it is their fault so they need to hide it.

When in abusive relationships, the abusers are often controlling and tries to isolate you from friends and family, this is what happened with Ashley. “I couldn’t go out with friends and he always wanted to be with me wherever I went”, says Ashley. This is one of the first signs that your partner could possibly be abusive. However, to a 13 or 14 year old girl, that kind of behaviour can be seen as cute or protective. Ashley used to think that as well, “he was protective and did not want me to get hurt, that made me like him more”.

When I eventually told my mom about the abuse, she did not want me to be with him anymore but the relationship still continued

Ashley recalls that the abuse affected her relationship with her mother. Whenever he was around things were always tense. The abuse was never reported to the police. Even though she was aware that she could report him, Ashley decided against it, “I did not want that kind of drama in my life so once we broke up I tried to forget it and move on”. Within the Domestic Violence Act, 116 of 1998, it states that anyone who is abused mentally, physically, emotionally or even stalked can lay a charge against the person who is abusing them. Before writing this feature, I did not know that such an Act even existed. Therefore it is safe to say that many young girls and even women do not know their rights where domestic violence is concerned.

Domestic abuse can happen to anyone, young or old. Younger girls are especially more vulnerable because they are not as developed and able to understand certain abusive behavioural traits that a boy might have. Below is a short video of my interview with Ashley. I have also added a link to a simplified version of the Domestic Violence Act.

*- Indicates the name has been changed and a pseudonym has been used.